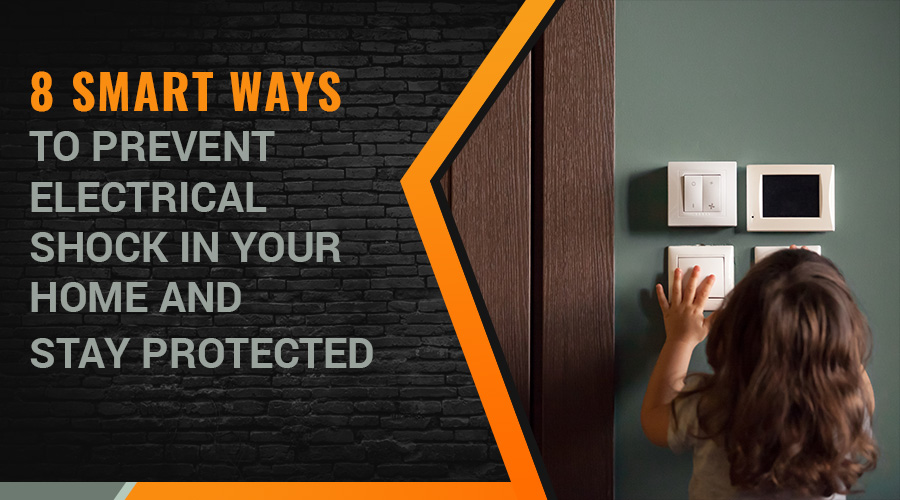 Have you ever tried to change a light bulb and received a shock? Did you try to fix a small electrical problem and suffered from an unwanted electrical injury? Well, an electrical impulse which is 14 milliamps only can be enough to kill a person. If you take proper precautions, then all electrical appliances and devices in your home can be safe and risk free.

The first rule to prevent an electric shock is to shut off the power that you had been working. But it is not that simple as it may seem to be. There are certain things in your home that can create an electric charge even when they are powered off. Also, you will have to work on some projects that require electricity and so, there will be some risk of getting shock when doing these works. It is extremely important to know when you need to shut down electrical appliances and equipment, to prevent shock that may take place when you do not touch any wires. You may contact 24 hour emergency electrician in London to know about different ways for avoiding electric shock and staying secured.

Turn off the power switch after using the device

Test for the power very carefully

It is important that you test for power of the device after you may turn off circuit breaker. Try to use another kind of electrical tester or a non-contact voltage tester that will check for circuit wiring and other electrical devices before you touch anything that has current.

If you have to work on a light switch, then shut off the power to the circuit of the switch and remove switch cover plate carefully. Touch the probe of non-contact voltage tester to switch terminal and electrical wire in the box to ensure there is no voltage.

Use insulated tools for safety purpose

It is important to use insulated tools when you perform any kind of electric work. Once you turn off the circuit and test the power before touching any wires, using insulated tools may be sufficient, but you should consider it to be easy precaution for the backup.

You do not know when a tool might drop or slip and cause an accident with electrical connection. Insulated tools have a minimal amount of exposed metal to avoid such catastrophes. If you are working on or near electrical equipment or wiring from a ladder, then try to use a non conductive fiberglass ladder than a metal ladder.

Be cautious of electrical distributor

Capacitors act like batteries as they hold electric charge by themselves. They are usually found in different electric appliances and other equipment that use motors such as air conditioners, freezers, garage door openers, microwave ovens and refrigerators.

Capacitors store electricity for helping motors to start up by giving them the ultimate boost at higher voltage. They may deliver a deadly shock when the appliance has been unplugged or the circuit power is turned off. It is advised not to work on electrical appliances or other equipment that contains capacitors unless you are aware how to discharge them safely.

If there is any electrical fixture that sparks often, give out shocks, short circuit or has frayed wires, then you may contact emergency electricians in London who will either fix or replace them as soon as possible. Outlets and switches will wear down over time with routine use and need to be replaced to assure electrical connections are stable. If an outlet or switch cover plate is already broken, then it is important to get it replaced on time. The cover plate can even avoid further tampering of the electrical connections and wiring.

Do not forget to check for socket voltage

If you are thinking to replace light bulbs, it is extremely important to keep a track of voltage as well as wattage. A light bulb can short out any time after it is inserted into the socket properly. However, you may avoid breaking a bulb and thus, creating a short circuit if you keep a track of light fixture voltages. You can also see the recommended maximum wattage printed on the light bulb socket. It is smart enough to use light bulbs that have almost equal or lesser wattage so that you do not overload lamp wiring.

If you are performing some kind of work that requires electricity, then check the power is turned on and plug the extension cord, power tool, other equipments or use a GFCI-protected extension cord.

GFCIs enable to detect for the electrical faults as well as shut off power to prevent further shock. Faults may take place due to several things such as – water getting on cord contacts or short circuits that occur inside the appliances, cords or tools. GFCI protection is very important when you work near any moisture area or outdoors, but it is definitely a safety measure for you.

Do not connect or disconnect under the load

When an electric appliance or other device is plugged or wired into a circuit and is running, then it means the circuit is “under load.” The device is not only drawing electricity and power flowing from the circuit into the appliance but gets back onto circuit wiring in a constant loop.

If you need to unplug an electrical device when it is turned on, then the electricity flow might form an arc which is electricity jumping across the gap from outlet to the plug. This is completely with small appliances and lamps that do not have on and off switches but the large appliances, like AC units, dryers, ranges and electric heaters can lead to risky arcs when connected or disconnected under load.

Thus, electrical shock can be a serious hazard that may cause injuries and even death. They can be the reason for muscle pain, seizures, respiratory failure, heart attacks and skin burns. It can take place both in your home and at the office and so, you should stay protected in order to avoid electric shocks. You may get in touch with our electrical contracts associated with Electric Works London and get all your electric appliances and devices checked before it is too late.