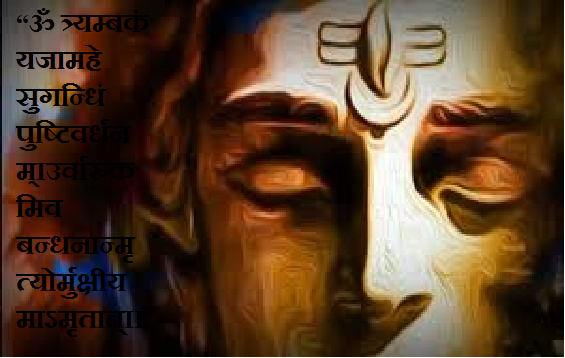 I am concentrating on my third eye, that is lying behind my other two eyes. It is giving me the power to feel everything and provides me with immense happiness, satisfaction, and inner peace. Although immortality is an impossible wish, but due to your power Lord Shiva, I will get some extension before my death takes place.

It is mentioned in Hymn 59, Mandala 7 of the Rigveda.  A mantra dedicated to Lord Shiva, it is accredited to Maharshi Vashishtha. He happens to be one of the Saptarshis.

Lord Shiva himself appeared in his divine form to give this mantra to sage Markandeya. The whole story goes like this:

Sage Mrikandu and his wife Madhumati started a penance dedicated to Lord Shiva so that they could get a son. A long time passed, and Lord became very happy seeing their dedication. He appeared before them and told them to ask for a boon. When the couple told him their wish, however, Lord gave them a choice – a low-intelligence son with long lifespan or a highly intelligent son who will die after completing 12 years. And the Rishi couple accepted the later boon.

Soon Rishi Mrikandu and his wife were blessed with a son whom they named Markandeya and started living a happy life. However as soon as his 12th birthday started approaching, they started becoming depressed. Seeing this, their son asked what the reason behind their unhappiness was.

When his parents told him everything, Rishi Markandeya started a penance in Lord Shiva’s honour. As soon as he turned 12, Lord Yamraj sent his messengers to bring Markandeya’s soul to Yamaoka. However, the messengers failed to do so since the boy was too absorbed in his prayers in front of Shiva Linga. Then Yamraj himself went there to complete the task. As soon as he tried to separate Markandeya’s soul from the body, the latter started shouting Lord Shiva’s name.

Then Lord himself appeared there and killed Yamraj for disturbing his devotee. However, he later revived him. He went on to give a boon of long life and also taught Mahamrityunjaya mantra to Markandeya. Then he went on to become a great sage who showed the world this mantra’s importance.

When to Chant Mahamrityunjaya Mantra

Our shastras suggest that the best time to chant this mantra is the morning time from 2-4 am. You should chant it minimum five chants using the rudraksha mala (it’s auspicious). Make sure that your count should not be less than the previous day. While chanting, apply full concentration on mantra meanings and don’t let any distraction disturb you. If you can’t chant it in the morning, you can do it after finishing your daily task and then taking a bath.

When you start chanting this mantra with full faith, it creates a vibration in the surrounding that kills negativity of all kind around you. The mantra’s vibrations have healing effects that cure any kind of fear, especially the one related to death. It’s chanting creates a positive aura around us, and we start attracting better things in our lives.