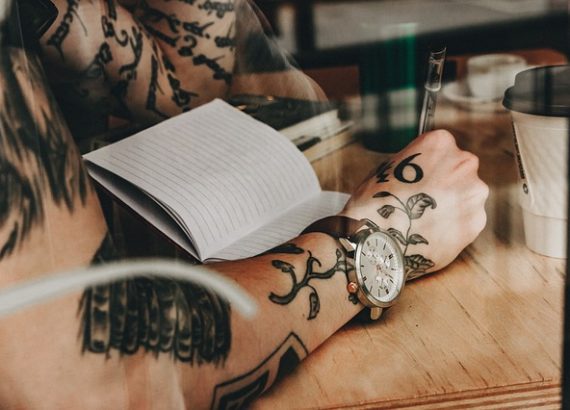 Tattoos were always used to identify certain groups of people throughout history. They were also used in the past to mark criminal personnel as well. With the specific identity markings tattooed on them these criminals could be identified in the blink of an eye just by observing the tattoos on their body. These tattoos were also used for Jews who were arrested during the Nazi strong hold over Germany.

Nowadays tattoos are used amongst prisoners so that they can be identified as a member of a certain group or gang and also to show unity among other prisoners. It makes them look more intimidating. However the tattoo gun is not allowed to be carried in prisons but prisoners somehow find a way to do so. The prisoners usually find it easy to get needles, razors and simple things like these excluding the motor-machine that are necessary to make a tattoo gun of their own to get the tattoo job done.

In prisons, it’s very difficult to sneak in the tattoo ink thus usually the tattoos are comprised of blue or black colored ink. Tattoo ink is made in prisons in a raw manner by melting candle wax or specific kinds of rubber which is then used by mixing it with water. If somehow motor is not available to make a tattoo gun the tattoo process becomes very much unhurried and takes a lot of time. Check out some classical and branding tattoos for men that can be an inspiration for you.

It doesn’t matter if a prisoner is a part of a gang or not as when he/she will be leaving the prison he/she would definitely be a part of one. The main concept of being a gang member is to develop brotherhood amongst the prisoners however, the tattoos which indicate brotherhood of a specific gang makes the job easy for the policemen to identify gang members later on at some time in the future. So, these tattoos also work as an identifier of specific gang members for the police.

Nowadays Prison design tattoos are not only confined to actual prisoners but also are equally popular among people who have never been to any prison before just because they want to look badass. In fact it’s easy to tell if the tattoo is a real prison tattoo or not just by simply observing the color of the ink. If the ink color other than black or blue, it’s definitely not an original prison tattoo. Prison tattoos are huge and striking to give a dominant look to the bearer. So, it is preferred that a thorough research should be made before getting a prison tattoo if you want to stay away from trouble in the future.

Prison tattoos are high risk tattoos as the tattooing process in prisons is not refined and the prisoners are more likely to get diseases like AIDS due to reusing of an infected needle. Tattooing should be carried out in a hygienic environment using proper tattoo guns and tools to ensure the well-being of the bearer but these facilities are not available in prisons thus promoting the use of unhealthy means for getting a tattoo.